American women in World War II | BelFlick
My American Photo Stories :: Places I've been in the United States of America, People I've seen, Roads I've driven on, Nature, Love, Life, the photos and the stories behind each one!

There were American women in the war, you almost get the impression that all the World War II veterans are men 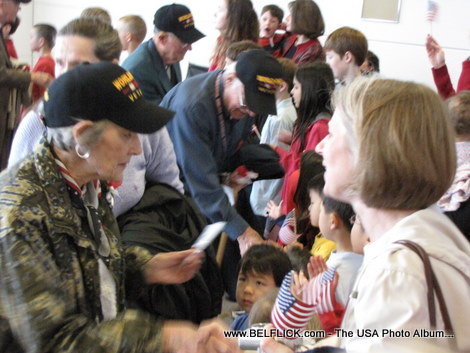 Think about it for a minute. How often do you meet or hear people talking about the women in World War II or a woman World War II veteran?

It is as though we forget that they were actually American women in World War II.

The picture you're looking at shows you one of these Great American women being greeted bye her fellow American woman at Washington Dulles International Airport.

Talk about being grateful... A picture is worth a thousand words isn't it?

A little history lesson: During World War II, approximately 400,000 U.S. women served with the armed forces and more than 460 lost their lives as a result of the war, including 16 from enemy fire.

US Airways says: We Salute Veterans for their distinguished...

Haitian Food: Some Delicious Diri and Sòs pwa Legume at...

How often do you see Airline passengers waiting patiently in...

A street in New City, New York, during the fall season